Is it a shark or a whale? It’s a shark, which is considered a fish, but its massive size and way of feeding resembles large whales. 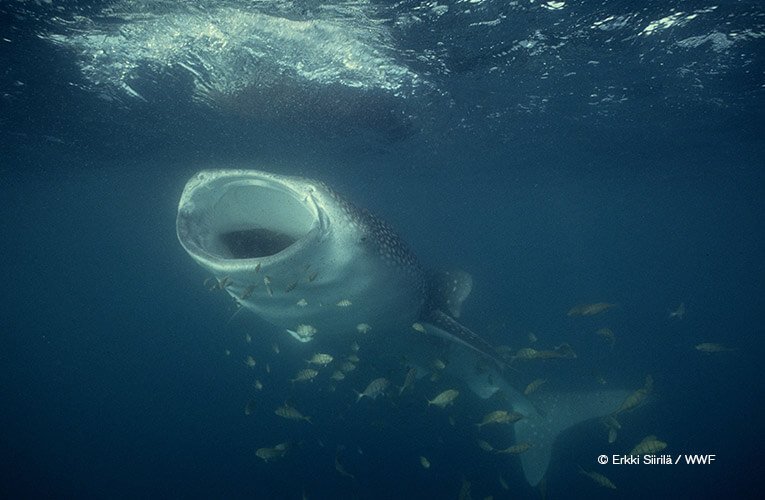 It’s not a regular shark, like the others. If we hear its name for the first time and try to guess what they eat, we would probably be wrong. Not a sea lion, a dolphin or a seal as we would imagine. What feeds this 20 meter long fish is, mostly, plankton. These sharks just needs to swim towards the surface, open their gigantic mouths and they will catch small plants, animals and fish.

Their feeding process is interesting and actually has a name: filtration. According to National Geographic, they “widen their huge jaws and absorb everything that is close by. Then they close their mouths, expelling and filtering the water through the gills. Everything inside is ingested by this giant shark. ”

The whale shark is the largest fish in the world, they swim, preferably, in warm waters of all tropical seas, for example in Ecuador and its Galapagos Islands. It is characterized by its white dots on its gray back with pale vertical and horizontal stripes. Additionally, their docility allows many divers to swim very close to them, even holding their body.

Despite being an extraordinary species, the whale shark is listed as a vulnerable species. Unfortunately, it remains the victim of hunting in parts of Asia, Taiwan and the Philippines. But you can help them from home. You can start with the reduction of all types of plastics, especially those for single use (those that you use only once before discarding them), which end up in the oceans and are confused as food by marine species. In addition, you can symbolically adopt a whale shark to protect it. Contributing allows financing projects and activities aimed at their conservation.

The 10 best photos of Cayambe, Ecuador

The red kite, one of the main conservation success stories of the last 20 years