#ShortStories #DecisiveMoments Now you can only find them north of the province of Sumatra and Aceh. Of the 9 populations of orangutans, only 7 aim to have a long life and only 3 have a number greater than 1000.

A while ago, an orangutan was rescued after his mother was injured by trunks during a felling of trees. She was later beaten to death with a machete. Even if you don’t believe it, this is common. In Indonesia, humans burn, cut down and destroy thousands of hectares of forests to plant palm oil, one more ingredient that you find in your soap, shampoo, chocolates and a large number of homemade products (see the “ingredients” label, you will know that an orangutan, a tiger, an elephant and more beings could have died for it).

The rescued orangutan was called Udin, he was special and people could tell he was intelligent. His caretakers even say he was a genius and many orangutans in the shelter observed him to learn from him. He was in quarantine for 3 years and then transferred to a protected forest and subsequently reintroduced to the jungle at the northern point of the island of Sumatra, Indonesia. It was a very emotional moment for the team, especially for their main caretaker, who took Udin by the hand and then released him into his habitat. When he did, Udin climbed the trees, moving from side to side, with natural agility. Udin is a survivor, fortunate to be found and rescued, one of the few who was lucky enough to be saved from being killed or captured and then sold as a pet.

Orangutans are, undoubtedly, one of the most endangered beings in the world and to make matters worse they are mammals who take longer to reproduce. They have a young one every 8 or 9 years. But they are very intelligent, they always learn from what they see, they seek solutions to problems and build tools to get food. In addition, they make about 2 nests a day, one to take a nap and another to spend the night. Now, the Leuse Ecosystem, and the places of Suaka and Jantho in Indonesia, are what little remains of home to the threatened orangutans of Sumatra.

But we can still save them taking a first step towards a bigger solution: on the label of products such as soap, shampoo, pasta and chocolates, look at the ingredients its composed of, companies use several names for palm oil. Only by doing this you will know which products you are buying may be causing the death of the orangutans.

It’s important to pay attention to these facts: 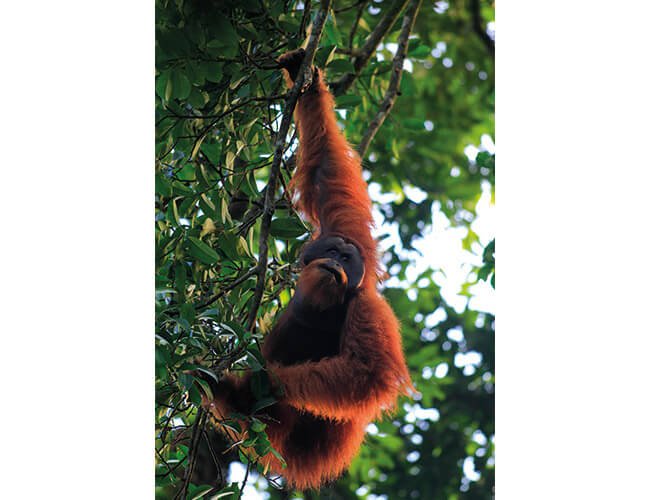 On the other hand, you can symbolically adopt an orangutan, your contribution finances conservation and protection projects for these incredible beings.

The albatross, an endemic bird of the Galapagos Islands