In recent weeks, a video of a polar bear roaming a land without ice, trying to survive, eating garbage, starving to death circulated in social media. It happened in front of two cameramen who could do nothing to help him, because it’s not that simple. The problem, scientifically proven, is Global Warming.

Millions of people watched the shocking video published by National Geographic, filmed by Paul Nicklen and Cristina Mittermeier of Sea Legacy, a nonprofit group. This content led scientists to investigate further to understand how Global Warming is affecting the polar bear. The results found are discouraging. More and more bears starve to death due to the melting of ice caused by rising temperatures on the planet which, in turn, is caused and accelerated by humans.

Necklaces, GPS and cameras were attached on 9 female polar bears in Alaska and recaptured 11 days later. The results yielded worrying data that show how bears now have to survive in the conditions forced by our actions:

The polar bear is considered vulnerable in the United States and is on the list of vulnerable species in the IUCN (International Conservation Union of Nature) since its habitat is in danger: the poles and their surroundings, where there were huge ice surfaces are disappearing. They are carnivores, they live up to 25 to 30 years. Its main method of hunting, with a 3% success, is to wait for hours on the surface of the ice until a seal emerges from the water to breathe, that’s when it attacks it. They do this to minimize the energy consumption of their body.

A study by Amstrup estimates that “by 2050 the bear population will be reduced to a third of the current one. At the moment, there are 19 groups of these animals scattered throughout the United States, Canada, Greenland, Norway and Russia; 4 populations show a decrease in their number, bears in the Beaufort region have fallen by 40%, 5 populations remain stable and about the rest, there is not enough information to give a measurement ”.

Global Warming is warming the Arctic faster than anywhere else. Its ice melts 14% every decade. Photographs show a reduction of 1994291 km2 of ice (almost the combined size of Colombia and Venezuela or, 7 times the size of Ecuador).

Rising temperatures cause glaciers to break early at the end of spring, and form late in the fall. This forces bears to burn large amounts of calories as they must walk more and swim longer distances until they find ice and places with seals. Studies show that bears are not made for walking or efficient in doing so. The more they do the more weight they lose, they even lose muscle, which decreases their success in hunting.

WHAT DOES THIS MEAN?

Polar bears that swim more mean future smaller polar bears; the reproduction rate will decrease and the risk of death will increase, more bears will starve.

There is a case of a bear that swam 686 km (representing a round trip from Quito to Atacames) for 9 days to look for food. She lost 22% of his weight and also lost his son who started the trip with her.

It is not known if the malnourished crawling bear that we saw in the video, died of hunger. What is known is that the hope of survival of the species are in our hands and our effort reduce the human impact on Global Warming. 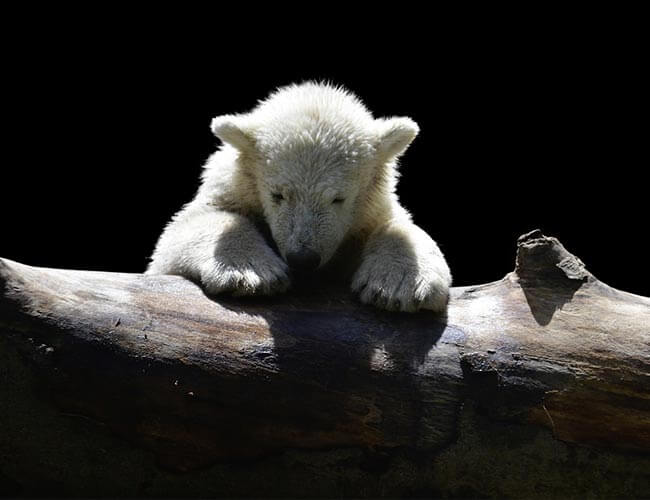 It is time to be aware of how our daily activities affect the planet and the species that have no way to defend themselves and are currently struggling to survive. As you read, a polar bear is walking and swimming hundreds of kilometers to look for food, with less and less chance of finding it and with a greater chance of starving in a more and more complicated environment, in a place affected by Global Warming.

The fight is a big one. The union of countries and people are needed. But every change begins in small adjustments of our daily life, in changing habits, in using a bike instead of a vehicle, in sharing the car to go to work. In recycling, in not buying clothes with animal skins which encourages illegal hunting. There are few actions that would have an enormous impact on our planet and the life of animals that may cease to exist. In the coming weeks we will further develop these ideas on how we can help and invite you to contribute initiatives to socialize with the community.

Live the 360 ​​video experience in the Okavango Delta

The 10 best photos of Chimborazo Volcano

The Chinese Fleet, an environmental threat, is now with 245 fishing vessels very close to the Galapagos Islands