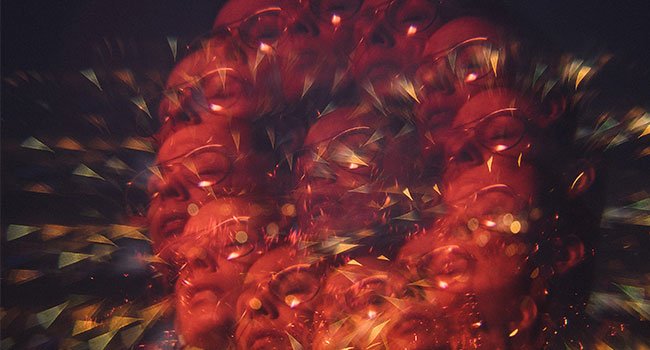 Peguche, Imbabura. Midnight. Lying on a mat out in the open. I haven’t eaten all day. Twelve broken strangers, a shaman dressed as a civilian, and I formed a circle around a campfire. The fire supplies the light but not the cold. Twenty minutes ago I had a thick, bitter shot of Ayahuasca, an ancestral drink made from the decoction of the homonymous plant and another called “chacruna”, which contains the hallucinogen DMT.

Also known as “huasca”, “yagé”, or “daime”, ayahuasca is considered by many as a curative and even miraculous medicine. “Aya” means liana and “huasca”, dead. Taking it is like a jump on the vine into the underworld of the unconscious, or so they say. In order not to be recognized by the spirits, supposedly, they paint our faces with watercolors and put temporary tattoos on us. I stare at the sky but I can’t take off beyond the pareidolias in the clouds. “Refine, refine the thought, heal heals the medicine ”, they sing, they play the guitar, the drum, the rattle. Other than fasting, the organizers asked from us to stop taking any sleeping pills, meat and sex a few days before the ceremony, we had to avoid the use of red or black garments as well. They also warned me that Ayahuasca would purge the body; twenty minutes after the intake, one by one, the participants leave the patch of grass where we are settled and go either to the bathroom or to the corners of the patio, with diarrhea or vomit, respectively. They use the euphemism “relieve.”

I hold onto some tissues, a bottle of water, and wait for my turn. Nothing. Noticing my immunity, the shaman offers me a refill. We walk to the makeshift altar of white tablecloth and candles, grab the pealed Coca- Cola bottle full of the liquid, pour it into a glass and whisper a mantra. He spits pure alcohol all over my body and hands me a fan of dried leaves. The morning passes in a collective silence, a tortuous boredom. The others meditate with their eyes open and then they sleep until they snore. The only one awake wandering is me, the one who came to treat his insomnia.

Suddenly I gag but I can’t vomit. Incessant and intense. “I’m intoxicated” I claim
– “Take it easy, it’s the” grandmother “(Ayahuasca) acting,” declares the shaman. “Try to breathe and become like the water of the river, that although it collides with stones, does not change its course ”.
“Call 911”, I reply. The nausea is exaggerated, but here everything is the other way around and it is not treated as a symptom but as a diagnosis “Go through it and feel what Aya wants to tell you”, intervenes a boy who proudly displays a necklace of burns made with the venom of a Kambó frog which also holds healing powers.

This was not on your Facebook ad! I claim. I start to focus on my breath, inhale, exhale, bring the air into the stomach. The discomfort is such that everything ceases to matter to me, I paused my thoughts, as a shortcut to meditation, I shift the ego and its demands and become one with the pain. I close my eyes. An out-of-date rooster sings, a dog howls, and it makes me scream. The early morning sun glimpses to the modest block house to one of the armchairs where I wake up. Everyone except me claim to have had epiphanies, visited their past or future, have forgiven themselves and others. They claim to be cured. They thank Pacha Mama and hug those who, until a few hours ago, were unknown. Now they are called family.

After the farewell, one of the organizers, takes out an Osho tarot deck to read it as we wait for our transportation. Without planning it, I begin to recognize figures that stick out of the cards as lenticular impressions, like a 3D. They call this phenomenon “painting” (hallucinating) and of course, it was planned to happen at night and early morning but that’s how rebellious my psyche is. I managed to “paint” the figure of a galloping horse, a UFO over the tapestries of the mountains and Jesus Christ on the cross with different faces.

If you want to share a story, you can send it to us at [email protected]

#MySaga | Life and death of the sun

#Mysaga | Story of the Monarch Butterflies